Why people latch on to conspiracy theories, according to science

Misinformation spurred the mob that stormed the Capitol, highlighting the disastrous effects such theories can produce. 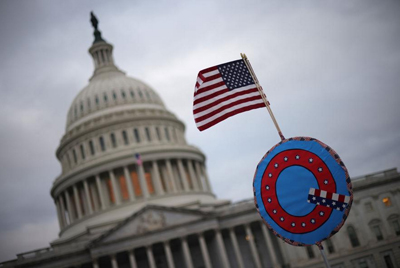 Supporters of U.S. President Donald Trump fly a U.S. flag over a symbol representing the QAnon conspiracy theory as they gather outside the U.S. Capitol on January 6, 2021, in Washington, D.C. Photograph by Win McNamee, Getty Images
Jillian Kramer
National Geographic
Experts say that the majority of people do not easily fall for falsehoods. But when misinformation offers simple, casual explanations for otherwise random events, “it helps restore a sense of agency and control for many people,” says Sander van der Linden, a social psychologist at the University of Cambridge.
The misinformation constantly swirling around us is now set against the backdrop of the pandemic, an unemployment crisis, mass demonstrations against police violence and racial injustice, and a deeply polarizing presidential election. During times of turmoil, the explanations provided by conspiracy theories and other falsehoods can be even more appealing—though not impossible to discourage or resist.  Read more >>
Posted by Anthony Derek Catalano at 7:18 AM