Calls to replace Trump via the 25th Amendment are growing. Here’s why it’s never happened before.

Eisenhower-era fears of an incapacitated president spurred the measure’s adoption. Its most serious provision has never been invoked. 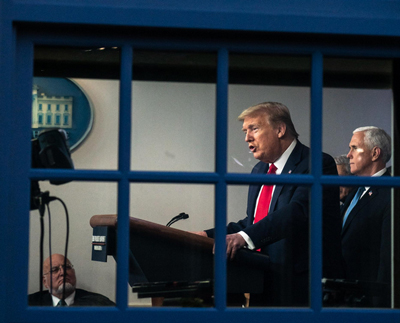 President Donald Trump and Vice President Mike Pence at a coronavirus task force briefing in April 2020. In the wake of the insurrection of the U.S. Capitol, lawmakers have called on Pence to invoke the 25th Amendment that would remove Trump from office. Photograph by Anna M​oneymaker, The New York Times, Redux
Erin Blakemore
National Geographic
In the hours after an armed mob of President Trump’s supporters stormed the U.S. Capitol to disrupt the certification of the presidential election, reports emerged that senior Trump administration officials are considering invoking the 25th Amendment to remove the president from office before his term expires on January 20.
Calls to invoke the amendment from lawmakers on both sides of the aisle have also intensified. Among them are presumptive Senate Majority Leader Chuck Schumer, a Democrat; Democratic Speaker of the House Nancy Pelosi; Senator Bob Casey, a Democrat from Pennsylvania; and Republican Adam Kinziger, a Representative from Illinois. “What happened at the U.S. Capitol yesterday was an insurrection against the United States, incited by President Trump,” Schumer wrote. “This president must not hold office one day longer.”
But what exactly is the 25th Amendment—and can a vice president really oust a sitting president? In force since 1967, the 25th Amendment was designed to fill the Constitution’s confusing silence on questions of succession in the wake of nearly two centuries of presidential illnesses and deaths. It also allows a vice president to work with other members of the government to remove from office a president who is deemed incapable of serving.
But due to its gravity, the provision that provides for presidential removal has never been invoked, and doing so could push the nation onto even shakier political ground. Here’s why—and a deeper look at how the 25th Amendment came to be.  Read more >>
Posted by Anthony Derek Catalano at 10:30 PM