Weak disturbance drifting toward the Bahamas 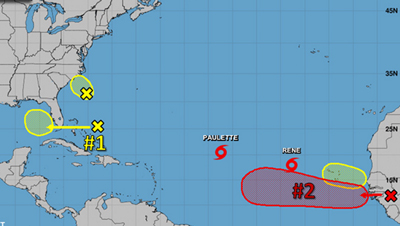 The tropical Atlantic remains busy as we are at the peak of hurricane season, according to the National Weather Service.

There are no immediate threats to Southwest Louisiana or far Southeast Texas from any of these disturbances.

However, a weak disturbance currently east of the Bahamas bears watching over the next few days as it drifts toward Florida.

Upper-level conditions could become conducive for development of this system over the weekend while it drifts west-northwestward over the eastern Gulf of Mexico.

A tropical wave is expected to move off of Africa today and has a high chance of development, but it is much too early to speculate on its eventual path or intensity, the National Weather Service said.  (source)
Posted by Anthony Derek Catalano at 5:02 AM