Trump on Putin critic Alexei Navalny's poisoning: "We haven't had any proof yet" 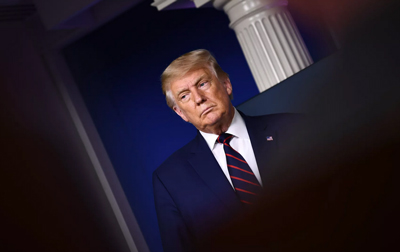 President Trump denied there is any proof that Russia poisoned opposition leader Alexei Navalny at a White House press conference on Friday, saying he would be "very angry if that is the case."

Why it matters: Trump, in his first public comments since Nalvany fell ill during a flight from Siberia to Moscow, said: "I don't know exactly what happened." The German government announced this week that the poisoning was conducted with Novichok, a chemical typically associated with Russian security services.

What Trump's saying: "So, I don't know exactly what happened. I think that it is tragic. It is terrible. It should not happen. We have not had any proof yet, but we will take a look. ... I would be very angry if that is the case."

Instead of backing the German government's analysis of Nalvany's illness, Trump spoke of his relationship with other countries around the world and noted ongoing negotiations with Russia on a non-proliferation agreement.  Read more >>
Posted by Anthony Derek Catalano at 11:46 PM