The fires raging out West are unprecedented. They're also a mere preview of what climate change has in store 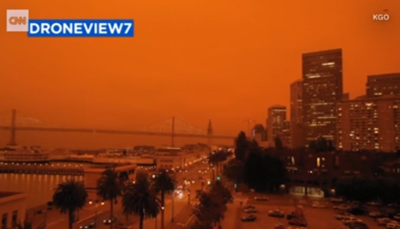 (CNN) - Entire towns have been burned to the ground.

Thousands have been forced to flee their homes.

And apocalyptic scenes played out in San Francisco, as the city was blanketed in smoke so thick it blocked out the sun.

The scale of the fires burning in the Western US right now are unprecedented.

More than 3 million acres have burned in California alone, with three of the five largest fires in state history still burning all at once, along with huge swaths of Oregon and Washington. Still, much of the West is only now entering what is typically the most active part of the region's fire season.

To scientists, the fingerprints of global warming on these wildfires -- and so many other disasters, from the fires that scorched Australia to the hurricanes that have slammed the US -- are clear.  Read more >>
Posted by Anthony Derek Catalano at 6:31 AM