News comes a week after the first COVID-19 death linked to the 10-day event that drew more than 400,000 people was recorded 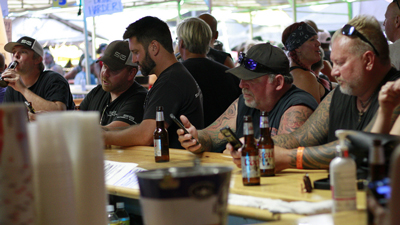 Inside a bar in Sturgis, S.D., during the rally, which Gov. Kristi Noem, a Republican, supported holding without significant public health protocols. Associated Press

The 10-day Sturgis Motorcycle Rally in South Dakota in August, which drew more than 400,000 people, has now been linked to more than 250,000 coronavirus cases, according to a study by the IZA Institute of Labor Economics.

Using anonymized cellphone data from the rally, researchers from the University of Colorado Denver, Bentley University, University of California San Diego and San Diego State University found the bikers, who were filmed and photographed in crowded bars, restaurants and outdoor venues mostly without face masks, allowed for many of the “worst-case scenarios” for “superspreading.”

The event “was prolonged, included individuals packed closely together, involved a large out-of-town population, and had low compliance with recommended infection countermeasures such as the use of masks,” the researchers wrote.

The event will cost an estimated $12.2 billion in health-care costs, they wrote.  Read more >>
Posted by Anthony Derek Catalano at 1:09 PM