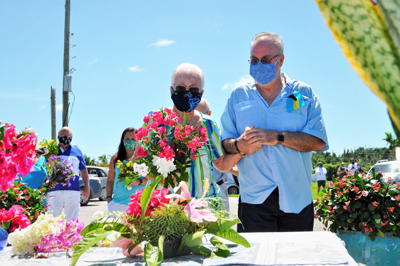 Defence Headquarters, 01 SEPT. ‘20 (RBDF):  Several members of the Royal Bahamas Defence Force were on the island of Abaco when Hurricane Dorian struck exactly a year ago today. It was therefore quite fitting for those stationed there to join in a community effort today with the residents of Marsh Harbour in remembrance of the lives lost during the ordeal last year.

Held on the junction of Queen’s Highway and Bay Street, this occasion was in observance of the one-year anniversary of the passing of the destructive hurricane. This tragic event left a gaping hole in the hearts and minds of many Bahamians, and in particular Abaconians. Described as one of the saddest days in Abaco’s history, a bystander shared her very vivid recollection of the storm.

“One year ago, almost exactly around this time, most of the houses were already gone. Just about everyone was underwater. Around 1 or 2 pm was about the time the eye came, and those who were still alive tried to find shelter somewhere else.”  Read more >>
Posted by Anthony Derek Catalano at 6:38 AM