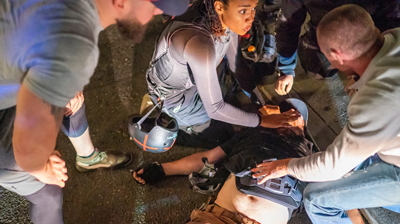 Police are investigating a military veteran’s involvement in what appears to be a white-on-white shooting death of a gang member participating in a protest to support racism. Although the event was not sponsored by Donald Trump or the Republican Party, the pro-Trump flags waved by the participants at the deadly event make it an official Trump rally in the same way that legitimate news outlets blame Black Lives Matter for the backlash every time a window breaks near a protest against police brutality.

According to the Oregonian, “sources familiar with the case but not authorized to speak” are investigating 48-year-old Michael Forest Reinoehl, who calls himself an antifascist, for his involvement in a gang-related shootout on Saturday night. During the incident in downtown Portland, Aaron Danielson, an activist with the right-wing terror group Patriot Prayer, died from a gunshot wound to the chest during a caravan sponsored by Donald Trump supporters. Grainy video of the incident appears to show a tall, thin white man running from the scene who was obviously fearing for his life after witnesses say Danielson allegedly sprayed bystanders with pepper spray or mace.  Read more >>
Posted by Anthony Derek Catalano at 6:44 AM