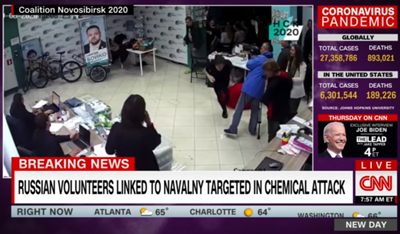 Moscow (CNN) - At least three volunteers linked to Russian opposition figure Alexey Navalny's team were taken ill on Tuesday after an attack on their Novosibirsk office with an unknown substance, an opposition activist told CNN.

Two men in tracksuits and wearing masks ran into the office of the opposition "Coalition Novosibirsk 2020" -- which is also the headquarters of Navalny's local team -- Olga Guseva, Navalny's team project manager in the Siberian city told CNN.

"One was holding the door, the other one with [screams of profanities] threw a bottle with a yellow liquid with a strong pungent chemical smell," Guseva told CNN.  Read more >>
Posted by Anthony Derek Catalano at 4:04 AM