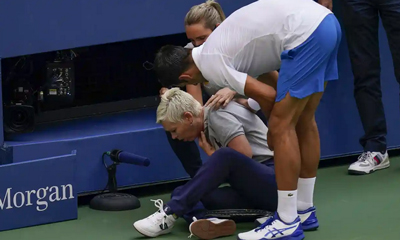 Novak Djokovic checks the injured line judge after hitting her with a ball in reaction to losing a point to Pablo Carreño Busta at the US Open. Photograph: Seth Wenig/AP

Novak Djokovic was thrown out of the US Open after accidentally hitting a woman line judge with a ball towards the end of the first set of his match against the Spaniard Pablo Carreño Busta, then was widely criticised for immediately leaving Flushing Meadows.

The world No 1 had to forfeit the $250,000 he was due for reaching the fourth round, “in addition to any or all fines levied,” according to the United Tennis Association, as well as losing all his ranking points.

The incident is a significant blow to Djokovic’s standing in tennis, especially as he was challenging the establishment by forming a rebel players’ association that has split the sport.

Djokovic walked from the court and shortly afterwards was seen leaving in his car and heading for his rented home. Word reached officials that he would not be returning to offer an explanation. It was not a good look.  Read more >>
Posted by Anthony Derek Catalano at 5:27 AM