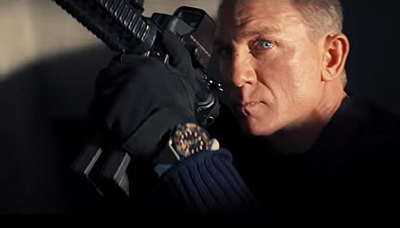 "The past isn't dead." The trailer for Daniel Craig's final James Bond movie feels classic in all the right ways.

When Daniel Craig first suited up as James Bond in 2006's Casino Royale, the traditional image of Ian Fleming's famous super-spy went out the window. Whereas old James Bonds of yore were charming and dashing, Craig's smoldering intensity grounded the character for the 21st century. (And he didn't care how you prepared his martini.)

Nearly 15 years later, Craig is finally hanging up his tux and Walther PPK. And in No Time to Die, he's doing it just like his predecessors, in a movie that looks and feels indisputably like vintage James Bond. You really can't mistake that Monty Norman theme for anything else.  View trailer >>
Posted by Anthony Derek Catalano at 12:48 AM