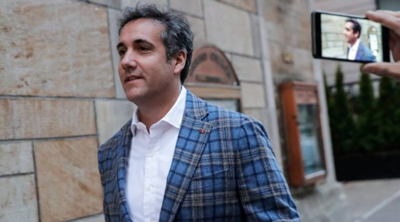 Donald Trump behaves like a mobster and has "a low opinion of all black people", according to the US president's former lawyer Michael Cohen.

The allegations come from Cohen's new book, Disloyal: A Memoir, written during his jail term for Trump campaign finance violations, among other crimes.

"Cohen is a disgraced felon and disbarred lawyer, who lied to Congress," press secretary Kayleigh McEnany said in a statement at the weekend. "He has lost all credibility, and it's unsurprising to see his latest attempt to profit off of lies."

In the book, Cohen alleges that Mr Trump is "guilty of the same crimes" that landed him in prison, and calls his former boss "a cheat, a liar, a fraud, a bully, a racist, a predator, a conman". He said he had the mentality of a "mob boss".

Various US news outlets have published quotes from the book, which comes out on Tuesday. Here are some of the key claims.

On black people and Mandela

"As a rule, Trump expressed low opinions of all black folks, from music to culture and politics," Cohen writes in his book.