Larry Flynt: My Final Farewell to the Falwells 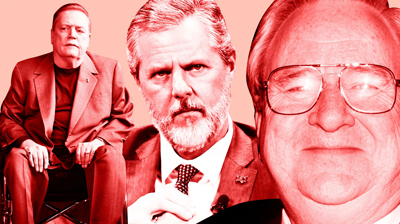 The Hustler publisher, who won a landmark First Amendment legal battle against Jerry Falwell Sr., writes about Jerry Falwell Jr.’s fall from grace—and the Trump of it all. Photo Illustration by The Daily Beast/Getty

When I heard that Jerry Falwell Jr. had resigned the presidency of Liberty University in disgrace, it struck me as the belated ending to a long personal saga with the Falwell clan—and an essential footnote to the role of religion and free speech in America. For those unfamiliar with ancient history, it began in the 1970s, soon after I started publishing Hustler.

Jerry Falwell Sr., then head of the Moral Majority Christian interest group, sued me for libel and the “intentional infliction of emotional distress” over a Hustler parody of a Campari ad that used the liqueur’s slogan: “You’ll never forget your first time.” The parody featured an interview with Falwell waxing nostalgic about his “first time”—with his mother in a Virginia outhouse.

The legal battle lasted five years, from 1983 to 1988, including three decisions against me in federal courts. There was an important principle at stake: the right of artists, writers, and publishers to satirize public figures. Finally, I was vindicated by the Supreme Court in a unanimous decision written by conservative Chief Justice William Rehnquist. This case is often cited as a landmark ruling for the preservation of our First Amendment rights to free speech.  Read more >>
Posted by Anthony Derek Catalano at 5:38 AM