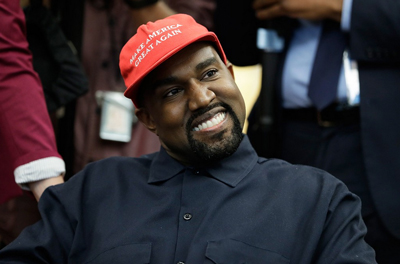 Kanye West is seated while meeting with President Donald Trump and others in the Oval Office of the White House on Oct. 11, 2018 in Washington, DC. AP Photo/Evan Vucci

The United States is 64 days away from the 2020 election on Nov. 3, and Kanye West is still on the campaign trail.

The rapper has appeared on a few ballots thus far, but public questioning of his intentions have risen--especially since Vice magazine published an article earlier this month claiming the Republican Party helped him submit the required signatures to appear on the ballot in the swing state of Wisconsin.

Nick Cannon is hoping to break down all of Ye's political controversies in a new interview he's been teasing on Instagram on Monday (Aug. 31). "People keep on saying I think that y'all, you and Republicans, are in cahoots," West said in a preview clip. Cannon responded saying that there are people who believe Republicans are "paying you to do what you're doing to be a distraction" in the upcoming election.

"Bro, can't nobody pay me," West replied. "I got more money than Trump."  Read more >>
Posted by Anthony Derek Catalano at 7:26 AM