Here Is the Bloody Face of Putin’s New Crackdown 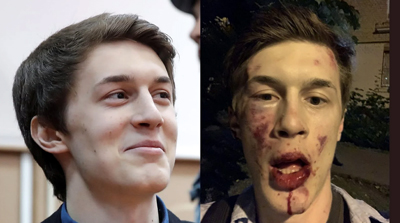 MOSCOW—Yegor Zhukov is the face of a new generation of Putin opponents using social media as well as student rallies to stand up to the regime. On Sunday night, he was beaten up outside his home in Moscow hours after posting a YouTube video criticizing Putin. In a statement to the police, he said: “I have not suffered any property damage, but my face is broken.”

An image of the 22-year-old’s bruised face, with bleeding lips and a swollen eye, has already gone viral online—an instant new symbol of Putin’s latest crackdown.

The country’s leading opposition figure, Aleksey Navalny, was already comatose in a hospital bed in Berlin, fighting to regain consciousness after what German doctors describe as exposure to a poisonous substance whose effects are consistent with a nerve agent.  Read more >>
Posted by Anthony Derek Catalano at 6:19 AM