A pandemic-fueled tech stock surge has reshaped the fortunes of the three-comma club. 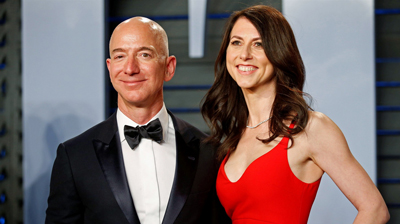 A pandemic-fueled tech stock surge has led to a reshuffling at the top of the U.S. billionaires list.

Since pandemic lockdowns started in March, the combined U.S. billionaire wealth has grown by nearly $800 billion, or over 25 percent, according to an analysis by Americans for Tax Fairness, an advocacy group.

As part of her divorce, Scott got a 4 percent stake in Amazon, whose stock has been on a tear as coronavirus-induced lockdowns propel online sales and home deliveries. Shares have risen from nearly $2,000 to $3,500 since the start of the year.  Read more >>
Posted by Anthony Derek Catalano at 5:54 AM