Can a Bubble Net Stop a Hurricane? Some Norwegians Think So 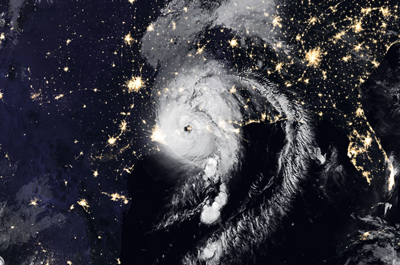 An idea to use underwater bubbles to cool oceans and deflate oncoming storms is the latest in a series of far-out schemes for controlling the weather. Photograph: NASA

From H-bomb father Edward Teller to Microsoft founder Bill Gates, for decades inventors have been churning out wild ideas to stop hurricanes before they hit land. Teller once suggested detonating a nuclear weapon to blow the storm off course, while Gates patented a series of pumps to push warm water down and cooler water up; neither plan got much traction.

The latest scheme—this one from Norway—proposes stretching a submerged “bubble net” across the path of an oncoming storm. To OceanTherm CEO Olav Hollingsæter, a hurricane’s swath of destruction could be slowed or even avoided using a technique that has kept Norwegian fjords ice-free since the late 1960s.

Imagine a long, thin, flexible pipe stretched between two ships. The pipe is moored a few hundred feet below the surface, like an upside-down shower curtain. A massive stream of bubbles escapes from the pipe, forming a frothy white current as it rises to the surface. That might give you an idea of what the creators of this project are envisioning. (Or perhaps just think of a giant aquarium bubbler.)

Hurricanes gain their energy from warm surface waters, in the process adding moisture to the air. Hotter surface water leads to more moisture. Hollingsæter, a retired submariner, says the upward current of bubbles would push cooler water to the ocean surface, in theory robbing the hurricane of its energy. “If we were able to avoid the water being so hot,” says Hollingsæter, “the hurricanes won’t be able to build such strength. They all disappear when they come into colder water.”  Read more >>
Posted by Anthony Derek Catalano at 6:26 AM