Why Hurricane Laura’s Storm Surge Could Be ‘Unsurvivable’

The deadliest aspect of a hurricane is the storm surge. And Louisiana and Texas are about to get hit with a massive wall of water. 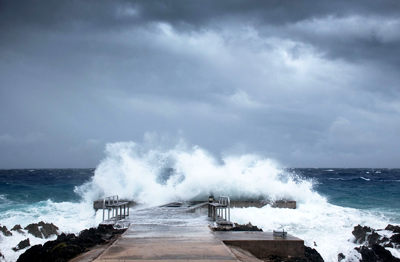 “In the center of a hurricane, you get incredibly low pressures, which actually allows a little bubble to form underneath the hurricane. The winds come and pick up that water and just pile it up on land."Photograph: Andrew McArthur/Getty Images

Having strengthened with astonishing speed into a Category 4 storm Wednesday, Hurricane Laura will make landfall in Texas and Louisiana sometime early Thursday morning. With the landfall comes a dreaded storm surge—a rise in water level generated by a storm—that scientists say could spread seawater up to 30 miles inland, an inundation the National Hurricane Center just called “unsurvivable.”

The surge will be particularly dangerous along the coast, but it will remain a threat as the water moves inland. “You have very large currents, very large and dangerous waves pretty far inland along the immediate coastline,” says Brian Zachry, Joint Hurricane Testbed director at the National Hurricane Center. “And if you’re talking about a surge of 15 to 20 feet with very large waves, you just can’t survive that.”

“Even if you go inland,” Zachry adds, “as water gets over the tops of banks of rivers and other estuaries and such, that water can also have some velocity to it. As you see in flash flooding from rainfall, you can get swept away in that.”  Read more >>
Posted by Anthony Derek Catalano at 8:13 PM