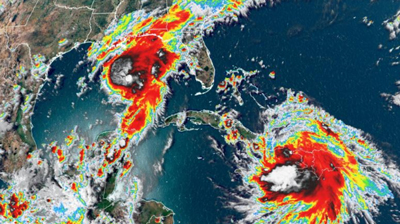 Marco strengthens to a hurricane with Laura close behind.

First up: Marco, which strengthened from a tropical storm to a Category 1 hurricane Sunday. Marco is expected to make landfall on the Louisiana coast Monday.

Then there's Tropical Storm Laura, which is also expected to strengthen to a hurricane before it makes landfall on the US mainland late Wednesday or early Thursday. Laura will also make landfall on or near the Louisiana coast.

"The unprecedented kind of thing here is that it's the same state within 48 hours of each other," National Weather Service meteorologist Benjamin Schott said.

"In modern meteorological history ... there's never been anything like this before where you could have possibly two hurricanes hitting within miles of each other over a 48 hour period."

And the one-two punch from Marco and Laura means "there may not be much of a window" for rescuers or power restoration crews to respond to victims between the two storms, Louisiana Gov. John Bel Edwards said.  Read more >>
Posted by Anthony Derek Catalano at 3:32 PM