Tropical depression forms, rain and thunderstorms to the southern islands by Saturday 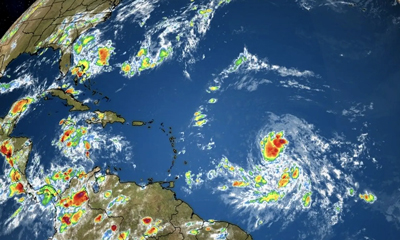 NASSAU, BAHAMAS — A tropical depression formed overnight and is expected to bring rain and possible thunderstorms to the southern islands of The Bahamas by Saturday.

When contacted yesterday, Chief Climatological Officer Michael Stubbs said the then-disturbance is projected to pass over the southern Bahamas Saturday evening and adverse weather conditions could be experienced across the entire Bahamas throughout Sunday.

He said: “By Sunday, the entire Bahamas could experience increased rain and thunderstorms throughout Sunday.”

At the time, Stubbs said it was unclear whether the disturbance could develop further into a named storm, but he noted the potential exists as he encouraged residents to prepare accordingly.

Based on some available modeling, the projected path of the disturbance could traverse the archipelago from south to north.

Others project the system could pass over the southeastern islands and parts of Andros as it moves northwesterly.

But the majority of guidance models on the early-cycle track show the disturbance passing south of The Bahamas and over Jamaica and Cuba.

As of 11pm, Tropical Depression Thirteen was moving west northwest at 20 mph, with maximum sustained winds of 35mph.

The National Hurricane Centre said the depression was likely to stay on a fairly quick west-northwest track during the next several days, taking the cyclone near the northern Leeward Islands by Friday night and near the Greater Antilles and southeastern Bahamas this weekend.  Read more >>
Posted by Anthony Derek Catalano at 9:38 AM