These Americans came to India to deepen their faith. They’ve been detained, quarantined and prosecuted. 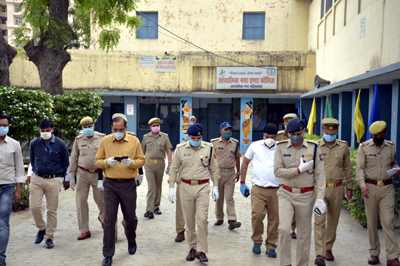 District magistrate and police officials visit to a school where a temporary jail was set up for people linked to Tablighi Jamaat in Ghaziabad, India, in April. (Sakib Ali/Hindustan Times/Getty Images)

By Joanna Slater and Niha Masih

NEW DELHI — When Ahmed Ali arrived in India earlier this year, he was looking forward to a month of religious study with a little souvenir shopping on the side.

His trip did not go as planned.

Instead, Ali — a pharmacy technician from Buffalo — was among at least six Americans caught up in a sweeping crackdown on an Islamic movement after it emerged as an early source of coronavirus infections in this nation of 1.3 billion people.

Five months later, hundreds of foreigners belonging to the same religious group are still in India. Many were detained, accused of breaking the law and prevented from leaving the country.

Ali, 43, and three members of his family had their passports confiscated and were kept in institutional quarantine for weeks even after repeatedly testing negative for the novel coronavirus.  Read more >>
Posted by Anthony Derek Catalano at 7:40 AM