The robot revolution has arrived

Machines now perform all sorts of tasks: They clean big stores, patrol borders, and help autistic children. But will they make life better for humans? 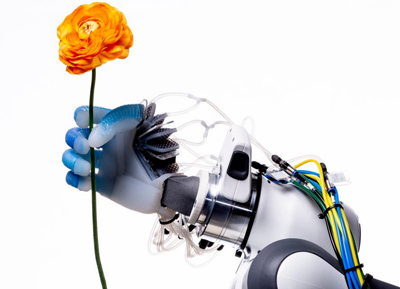 With a firm yet delicate grip, a robot hand at the Robotics and Biology Laboratory at the Technical University of Berlin picks up a flower with its pneumatic fingers. Recent advances have brought robots closer than ever to mimicking human abilities.

If you’re like most people, you’ve probably never met a robot. But you will.

I met one on a windy, bright day last January, on the short-grass prairie near Colorado’s border with Kansas, in the company of a rail-thin 31-year-old from San Francisco named Noah Ready-Campbell. To the south, wind turbines stretched to the horizon in uneven ranks, like a silent army of gleaming three-armed giants. In front of me was a hole that would become the foundation for another one.

A Caterpillar 336 excavator was digging that hole—62 feet in diameter, with walls that slope up at a 34-degree angle, and a floor 10 feet deep and almost perfectly level. The Cat piled the dug-up earth on a spot where it wouldn’t get in the way; it would start a new pile when necessary. Every dip, dig, raise, turn, and drop of the 41-ton machine required firm control and well-tuned judgment. In North America, skilled excavator operators earn as much as $100,000 a year.

The seat in this excavator, though, was empty. The operator lay on the cab’s roof. It had no hands; three snaky black cables linked it directly to the excavator’s control system. It had no eyes or ears either, since it used lasers, GPS, video cameras, and gyroscope-like sensors that estimate an object’s orientation in space to watch over its work. Ready-Campbell, co-founder of a San Francisco company called Built Robotics, clomped across the coarse dirt, climbed onto the excavator, and lifted the lid of a fancy luggage carrier on the roof. Inside was his company’s product—a 200-pound device that does work that once required a human being.  Read more >>
Posted by Anthony Derek Catalano at 8:23 AM