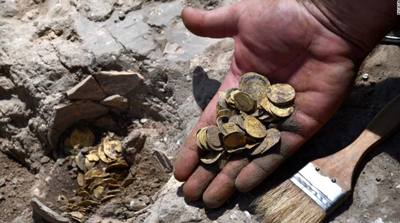 Two Israeli teenagers on summer break unearthed a trove of hundreds of gold coins that date from 1,100 years ago.

The hoard, buried in a clay jar, was discovered at an archaeological dig in Yavne in central Israel, said the Israel Antiquities Authority (IAA) on Monday.

Robert Kool, a coin expert with the IAA, said the coins date back to the end of the 9th century when the region was under the control of the Islamic Abbasid Caliphate, a dynasty which ruled a territory from modern-day Algeria to Afghanistan. The coins -- 425 in all -- were made of pure 24-karat gold and weighed 845 grams (1.86 pounds).

"With such a sum, a person could buy a luxurious house in one of the best neighborhoods in Fustat, the enormous wealthy capital of Egypt in those days," said Kool.  View news video >>
Posted by Anthony Derek Catalano at 8:24 AM