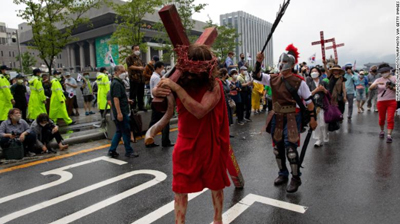 A demonstrator dressed as Jesus marches to the Presidential office during a rally against the government on August 15, 2020 in Seoul, South Korea.

Seoul (CNN) - A South Korean religious group at the center of a new coronavirus outbreak has been accused by the government of withholding key information and obstructing public health authorities in their fight against the pandemic.

As the scandal develops, many in the country would be forgiven for thinking "we've been here before."
In February, it was the Shincheonji religious group, thousands of whom were infected with the virus in the south eastern city of Daegu, setting the stage for an outbreak that raged throughout the country. The church was accused by officials of refusing to cooperate with the authorities, while members accused both the government and the press of defamation and religious persecution.

Now, history appears to be repeating itself with the Sarang-jeil Church in Seoul. It's the latest clash between a religious group and the government of President Moon Jae-in, who is attempting to stem South Korea's coronavirus outbreak while fighting off accusations he is curbing religious freedom.  Read more >>
Posted by Anthony Derek Catalano at 2:58 PM