More than 400 infections traced to Seoul church, whose leader has tested positive. 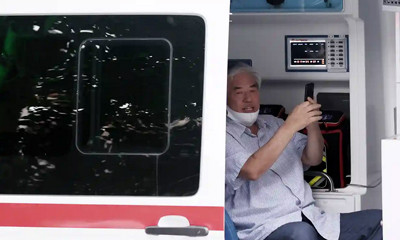 Jun Kwang-hun, the leader of Sarang Jeil church in Seoul, leaves his house in an ambulance on Monday 17 August. Photograph: Hong Hae-in/AP

South Korea has warned that it is on the brink of a new coronavirus crisis and could introduce stricter controls after a resurgence in cases, including hundreds linked to a church in Seoul.

The country reported 246 new Covid-19 infections on Tuesday, raising its total to 15,761, including 305 deaths, according to the Korea Centres for Disease Control and Prevention [KCDC].

Having brought the initial outbreak under control in April through its “trace, test and treat” approach, South Korea has added almost 1,000 cases over the past five days.

They include 279 cases on Sunday, the first time the number has exceeded 200 since early March, according to the Yonhap news agency.

Officials have urged people in Seoul and neighbouring Gyeonggi province – home to nearly half the country’s 51 million people – to stay at home and avoid non-essential travel, as a new cluster was identified among followers of a church in Seoul.

More than 400 infections have been linked to Sarang Jeil church, whose leader, Jun Kwang-hun, is among those who have tested positive for Covid-19, Yonhap said on Monday.

Jun, a far-right activist, has led protests against the country’s liberal president, Moon Jae-in, including a demonstration in Seoul on Saturday attended by thousands of followers who ignored government calls to stay home.  Read more >>
Posted by Anthony Derek Catalano at 6:55 AM