Shambolic: PM Forced Into Dramatic U-Turn After Public Fury At ‘No Notice’ Lockdown 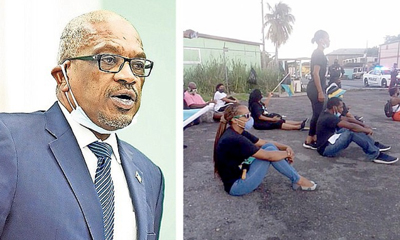 The announcement came in a statement from the Office of the Prime Minister after the government was roundly criticised by residents, the opposition and non-profit organisations and after he faced pressure from colleagues in government following a decision that left many without enough food and water in their homes.

Dr Minnis’ statement said the reversal came after Cabinet was briefed by weather officials on a storm that may impact the country and after residents raised concerns with him. He conceded residents and businesses need more time to prepare for such a lockdown.

His statement came shortly after Susan Larson, head of the National Food Distribution Task Force, said the group hoped the abrupt decision to close food stores would be revisited.

His statement said: “In the past few weeks there has been a disturbing rise in COVID-19 cases in New Providence.

“Sadly, additional deaths have been confirmed and our hospital system is stretched to capacity. In coordination with our public health team and through conversations with community stakeholders, it was made clear that the only way to beat back this deadly virus would be to extend lockdown provisions with more restrictions.

“On Monday 17 August, I made the announcement of increased restrictions for New Providence with immediate effect in order to save lives.

“My first priority is always to protect the health and safety of every Bahamian. However, after I spoke Monday night, Bahamians from all walks of life raised concerns with me.

“From these discussions two things are clear: There is broad understanding of the need to lock down New Providence in order to control and slow the spread of COVID-19; however, it is also clear that families and businesses need more time to prepare.

“I hear you. I understand you and know that in many cases we must make adjustments in the short-term to strengthen in the long run.”  Read more >>
Posted by Anthony Derek Catalano at 7:49 AM