Road Traffic still up and running, serving the public 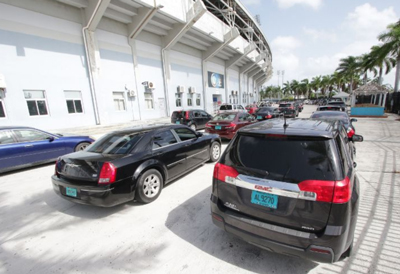 The Road Traffic Department has continued to offer service to the public since the lockdowns were implemented at the end of March.  (BIS Photo/Derek Smith)

Nassau, The Bahamas – The Road Traffic Department has continued to serve the public since the lockdowns were implemented at the end of March.  Although the department is currently only operating from its main National Stadium centre, Acting Controller, Mr. Bradley Sands said that it is business as usual save for a few minor adjustments – namely offering curbside services three times a week (Monday, Wednesday and Friday) and a change in time – from 8:00 am to 1:00pm on those days.

Relevant services are being offered, including the licensing and inspection of vehicles, transfers of ownership of vehicles, purchase of new license plates and renewals only of drivers’ licenses.  The issuance of new licenses has been placed on hold in order to respect Covid-19 protocols; new licenses require photograph to be taken on site.  Read more >>
Posted by Anthony Derek Catalano at 9:56 AM