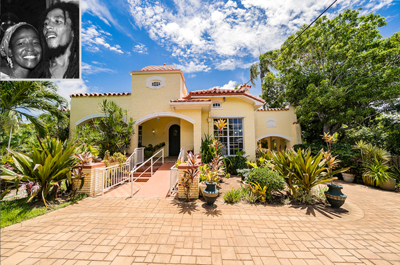 Rita Marley, the widow of the late music legend Bob Marley, has listed her historic home in Nassau, Bahamas for sale.

The home, called “La Randa,” was built in 1920 by a rum runner during prohibition and featured a since-blocked off tunnel running from the basement to the sea, according to a release. It is currently listed for $980,000.

In addition to its historic beginnings, La Randa was one of the few homes in the area left intact following the Great Hurricane of 1929.

“‘La Randa’ is a home that has a unique story to tell,” the listing from Engel & Völkers says. “Authentic architectural features are reflective of a commitment to its history, and perfectly embodies this one of a kind brick beauty.”  Read more >>
Posted by Anthony Derek Catalano at 7:15 AM