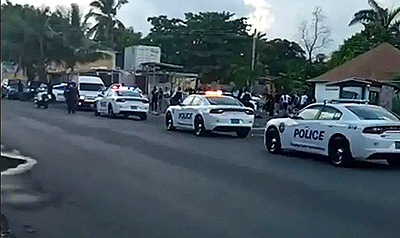 Police arrive at the scene of the protest on East Street today. FACEBOOK

The protest, which was streamed live on Facebook, was organized by Operation Sovereign Bahamas. The group protested the restrictive measures announced by Prime Minister Dr. Hubert Minnis last night, among other emergency orders.

Several protesters lamented the harsh economic conditions many people find themselves in as a result of the COVID-19 pandemic.

Others said they don’t have enough supplies at home, including food and pampers for their babies.

“This is not democratic,” one man shouted. “This is communism.”