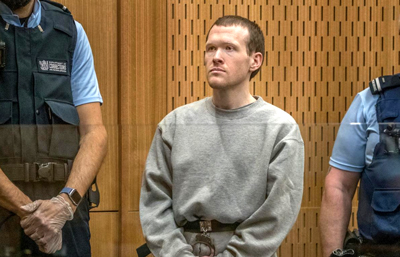 Brenton Tarrant, the gunman who shot and killed worshippers in the Christchurch mosque attacks, is seen during his sentencing at the High Court in Christchurch, New Zealand, August 24, 2020. John Kirk-Anderson/Pool via REUTERS

WELLINGTON (Reuters) - A New Zealand court sentenced a man who killed 51 Muslim worshippers in New Zealand’s deadliest shooting to life imprisonment without parole, the first time such a sentence has been handed down in the country.

Brenton Tarrant, a 29-year-old Australian, admitted to 51 charges of murder, 40 counts of attempted murder and one charge of committing a terrorist act during the 2019 shooting rampage at two Christchurch mosques which he livestreamed on Facebook.  (source)
Posted by Anthony Derek Catalano at 8:31 AM