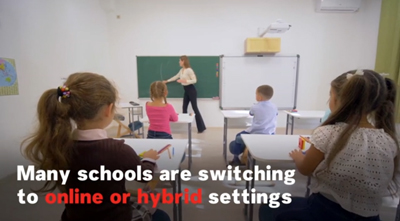 The number of Florida children diagnosed with the coronavirus has increased by nearly 9,000 over the past two weeks as schools across the state begin to reopen.

There are currently 48,730 confirmed cases of the novel virus among children under 18, according to a recent pediatric report released by the Florida Department of Health. In a previous report released August 9, there were 39,735 confirmed cases among the same group, which marks an increase of 8,995 cases over the past two weeks.

Across the different age groups listed in the pediatric report, there are 17,311 confirmed cases among Florida children between 14 and 17, which constitute 36 percent of all cases in children. Children between 5 and 10 make up the next largest share, 27 percent, and the pediatric report shows 12,946 cases in this age group.  Read more >>
Posted by Anthony Derek Catalano at 9:16 AM