Minister: Trump and his supporters don't speak for Jesus 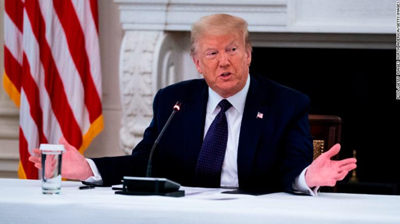 (CNN) - President Donald Trump is now presenting himself as God's special agent, defending American Christians against evil Democratic opponents. Trump declared earlier this month that Joe Biden, a practicing Catholic who has relied on his faith during moments of crisis, is "against God."

Trump's tweets are usually petty and spiteful, but now they have taken on an apocalyptic flavor. His recent language about God, Christianity and the Bible suggests that the universe is in grave danger if enough Americans vote for Biden.

The President maintains that Biden is "going to do things that nobody ever, would ever think even possible because he's following the radical left agenda. Take away your guns, destroy your Second Amendment. No religion, no anything. Hurt the Bible. Hurt God."

I am a biblical scholar and Presbyterian pastor, and such language is theologically bankrupt and dangerous. Trump labels himself a Presbyterian who attends church "occasionally," but he clearly has not heard a sermon on divine sovereignty -- basic Presbyterian theology would never argue that God is going to be "hurt" by partisan American politics.

Nor is Trump aware that the Bible is a complex text written over many centuries, and that there are different ways of interpreting its content.

Perhaps the most disturbing aspect of this incendiary rhetoric is the claim by Trump and some of his supporters that they have exclusive rights to what is "Christian" and "evangelical."  Read more >>
Posted by Anthony Derek Catalano at 2:11 PM