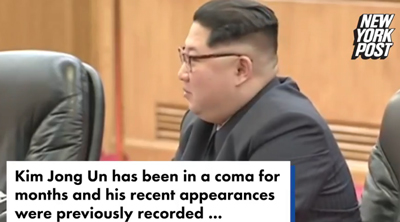 North Korean leader Kim Jong Un has been in a coma for months and all his recent public appearances were faked, a South Korean official says in a new report about the reclusive despot.

In April, rumors circulated that the Hermit Kingdom honcho was in a vegetative state after a botched heart operation.

The former aide now claims Kim fell into a coma months ago and that his subsequent appearances were recorded previously, according to the UK’s Sun.

“I assess him to be in a coma, but his life has not ended,” he told South Korean media, adding that the leader’s younger sister, Kim Yo Jong, was poised to help lead the country.  Read more >>
Posted by Anthony Derek Catalano at 4:33 PM