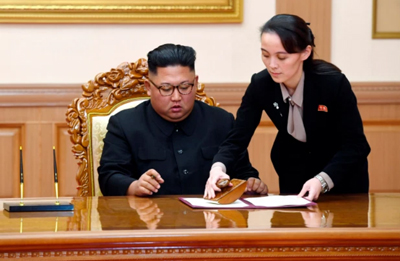 Kim Jong Un has delegated part of his authority to his younger sister, Kim Yo Jong, to help him cope with his mounting stress in leading North Korea, according to South Korea’s spy agency.

The despot’s sister now serves as his “de facto second-in-command,” though she has not been designated his successor, the National Intelligence Service said.

“Kim Yo Jong, the first vice department director of the Workers’ Party Central Committee, is steering overall state affairs based on the delegation,” the agency was quoted as saying in a closed-door briefing to South Korean lawmakers, the Yonhap News Agency reported.

The power shift partly seeks to “relieve (Kim’s) stress from his reign and avert culpability in the event of policy failure,” the intelligence agency said.  Read more >>
Posted by Anthony Derek Catalano at 8:47 AM