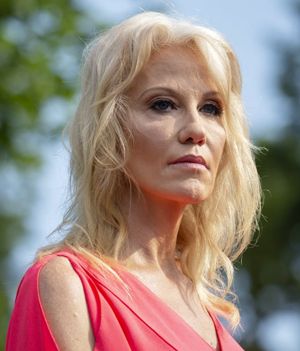 Days after Claudia Conway, the 15-year-old daughter of Donald Trump’s counselor Kellyanne Conway and her husband George, expressed her devastation over her mother speaking at the Republican National Convention this week on Twitter, both Kellyanne and George announced on Sunday that they are stepping down from their high-profile political positions. Kellyanne has served as Trump’s counselor since 2017 and George is a co-founder of The Lincoln Project, a committee formed in 2019 to fight against Trump’s reelection.

Kellyanne announced her intention to leave the White House and shared her parting words on Twitter, writing in an attached statement that she would be “transitioning from the White House at the end of this month.”

“Our four children are teens and ‘tweens starting a new academic year, in middle school and high school, remotely from home for at least a few months. As millions of parents nationwide know, kids ‘doing school from home’ requires a level of attention,” she stated. “This is completely my choice and my voice. In time, I will announce future plans. For now, and for my beloved children, it will be less drama, more mama.”  Read more >>
Posted by Anthony Derek Catalano at 4:38 PM