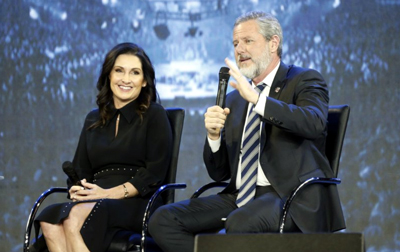 Corrects to Becki not Becky - FILE -This Wednesday Nov. 28, 2018 file photo shows Rev. Jerry Falwell Jr., right, and his wife, Becki during after a town hall at a convocation at Liberty University in Lynchburg, Va. Falwell Jr. says he is seeking help for the "emotional toll" from an affair his wife had with a man who he says later threatened his family. (AP Photo/Steve Helber)

By Sarah Rankin and Elana Schor

RICHMOND, Va. (AP) — Jerry Falwell Jr. resigned Monday from his leadership post at evangelical Liberty University amid allegations related to his wife’s sexual encounters with a much younger business partner, according to a school official.

A formal announcement from the school was expected later Monday, according to the official, who spoke on condition of anonymity because he was not authorized to discuss it.

The resignation came a day after Falwell issued a statement to The Washington Examiner publicly disclosing that his wife had an affair and saying the man involved had been threatening to reveal the relationship “to deliberately embarrass my wife, family, and Liberty University unless we agreed to pay him substantial monies.”

Hours before Falwell resigned, Reuters reported that Falwell knew of his wife’s affair and participated in some of the liaisons as a voyeur.  Read more >>
Posted by Anthony Derek Catalano at 5:35 PM