Jerry Falwell Jr., His Wife and the Pool Boy: Everything To Know About Their Alleged Relationship 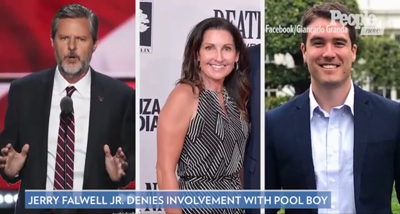 Giancarlo Granda claimed his "intimate relationship" with Becki Falwell went on for six years, while Jerry Falwell Jr. watched from the corner of the room.

Giancarlo Granda, a onetime Miami pool attendant, was thrust into the spotlight this week when he claimed to have been sexually involved with prominent evangelical Jerry Falwell Jr. and his wife Becki Falwell for years — something the newly resigned Liberty University leader has disputed.

In an explosive report with Reuters on Monday, Granda, 29, said he "developed an intimate relationship" with Becki, 53, after meeting at a Miami Beach hotel in March 2012.

Over the next six years, Granda claimed he joined the Falwells "multiple times per year" at hotels in Miami and New York as well as their home in Virginia, and would have sex with Becki while "Jerry enjoyed watching from the corner of the room."

Eventually, things between Granda and the couple ended, "in part because he wanted to dissolve his ties with the couple and fell into a business dispute with them," Reuters reported.  Read more >>
Posted by Anthony Derek Catalano at 8:23 AM