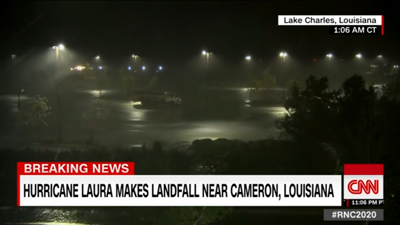 (CNN) - An extremely powerful Hurricane Laura is ripping apart portions of Louisiana and eastern Texas, roaring ashore initially as a Category 4 storm and tearing up roofs while knocking out power for hundreds of thousands.

Laura -- the region's strongest storm in over a century -- made landfall at about 1 a.m. CT with sustained winds of 150 mph. By 7 a.m. CT, the storm still was raging over inland Louisiana at Category 2 strength, with winds of 100 mph.

Pictures and interviews reveal widespread wind destruction in places like Louisiana's Lake Charles city, some 35 miles north of the coast. Across the city, roofs are damaged, trees are snapped, twisted and broken; steel poles and lampposts are bent; street signs are torn from the ground.  Read more >>
Posted by Anthony Derek Catalano at 8:57 AM