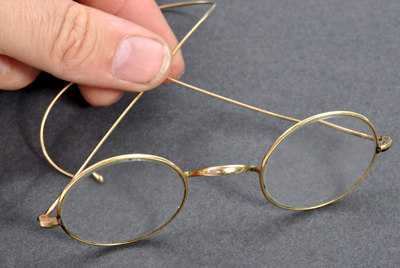 A pair of spectacles thought to belong to Indian independence leader Mahatma Gandhi sold at auction for £260,000 ($340,000) -- more than 17 times the initial estimate.

The impressive sum, which does not include buyer's premium or sales tax, was achieved at a British auction house on Friday, less than two months after the glasses were found "hanging out" of a letterbox on a busy industrial estate.

Speaking prior to the sale, auctioneer Andy Stowe said that he discovered the spectacles while checking the letterboxes at his office in Bristol, southwest England.  Read more >>
Posted by Anthony Derek Catalano at 8:43 AM