First ever double hurricane could hit the Gulf of Mexico

There have never been two hurricanes in the Gulf of Mexico at the same time before. 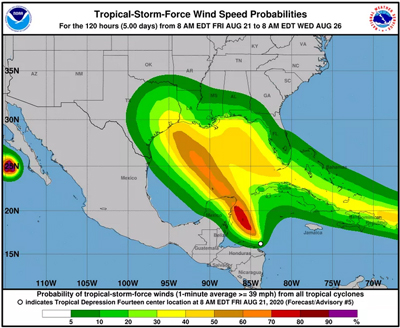 A map shows where at least tropical storm-force winds are expected in the coming days as the two storm systems approach one another in the Gulf of Mexico. Tropical Storm Laura's winds are seen approaching from the east. (Image: © NOAA/NHC)

Next week for the first time on record, two hurricanes could hit  the Gulf of Mexico at the same time.

Twice before, in 1959 and 1933, two tropical storms have entered the Gulf at the same time. But never before have both been hurricanes.

It might not go that way. Only one of the storm systems has yet strengthened into a tropical storm — a dangerous cyclone, but not yet a hurricane. The other remains a tropical depression, and its future is still unclear. But forecast models have suggested the possibility since at least Thursday (Aug. 20), and the storms are still following the path that would lead to double Gulf hurricanes.  Read more >>
Posted by Anthony Derek Catalano at 7:09 AM