Face To Face: A Lifetime’S Mission To Redress The Wrongs Of Slavery And Explore A People’S African Roots 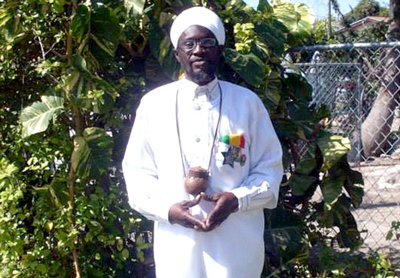 August is the month that commemorates the emancipation of Africans in the Western world. The people of the Rastafari movement never let Emancipation Day pass without impassioned calls for the freedom, redemption and repatriation of African descendants throughout the Diaspora. It has been decades since the calls first began.

In The Bahamas, Priest Philip Blyden is among those leaders who have paved the way and set a foundation for those who seek to better understand themselves, Pan Africanism and the Rastafari movement. He is literally a walking history book, well versed in African, Caribbean and Bahamian history. He is a priest of the Ethiopia Africa Black International Congress (EABIC); Chairman of the House of Rastafari (HOR) inter-mansion group; an art, craft and creative design teacher at Akhepran International Academy; a skilled contractor and a father and grandfather.

The current pandemic caused the Rastas to decide not to march on the streets for their right to be heard and heeded this Emancipation Day, as they have done year after year. However, the priest affectionately referred to as “Blyden” wants people to know the current state of affairs in terms of systemic racism - and even the health crisis being battled globally - are all signs of things long foretold by the Rastafari movement and that now, more than ever, African descendants must rise and pull together for their survival and success.  Read more >>
Posted by Anthony Derek Catalano at 10:17 AM