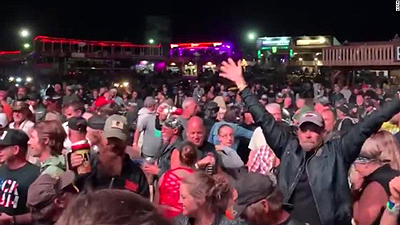 At least seven Covid-19 cases in Nebraska's Panhandle region have been tied to the rally, Kim Engel, director of the Panhandle Public Health District, confirmed in an email to CNN.

The cases that have appeared in Nebraska are the latest to be connected to the 80th annual Sturgis motorcycle rally, which took place August 7-16.

Minnesota also confirmed 15 cases of Covid-19 connected with the rally, according to Kris Ehresmann, director of the Minnesota Health Department Infectious Disease Division. Of those 15 cases, one person has been hospitalized. Health officials say they expect to see additional cases in the next few days, Ehresmann said.

South Dakota state health officials announced Thursday that a person who worked at a tattoo shop in Sturgis had tested positive for the virus and could have possibly exposed people during the event last week.  Read more >>
Posted by Anthony Derek Catalano at 6:29 AM