A person visited One-Eyed Jack's Saloon in Sturgis "while able to transmit the virus to others," officials said. 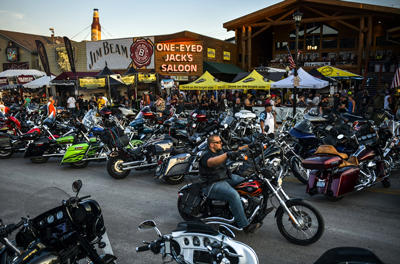 A person who visited a bar during the Sturgis Motorcycle Rally has tested positive for the coronavirus, health officials in South Dakota said.

The person visited One-Eyed Jack's Saloon in Sturgis between noon and 5:30 p.m. on Tuesday, Aug. 11 "while able to transmit the virus to others," according to a news release by the state's Department of Health.

"Due to the risk of exposure, individuals that visited the business during the specified dates and times should monitor for symptoms for 14 days after they visited," the health department said.

The health department said the person who tested positive is a resident of South Dakota but did not give any other details.

The rally kicked off Aug. 7 in Sturgis, about 30 miles northwest of Rapid City, and ended on Sunday. The state's Department of Transportation said that the 10-day event attracted more than 460,000 vehicles, down nearly 8 percent from last year's numbers.  Read more >>
Posted by Anthony Derek Catalano at 8:06 AM