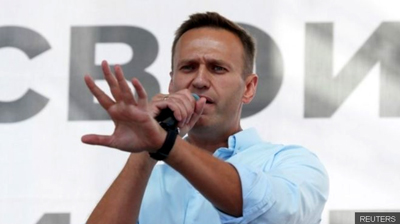 Mr Navalny was flying to Moscow from Tomsk and was diverted to Omsk after he fell ill.

The anti-corruption campaigner fell ill during a flight and the plane made an emergency landing in Omsk, where doctors said he was in a coma and they were trying to save his life.

His team suspects something was put in his tea at an airport cafe.

The Kremlin said that it wished Mr Navalny a "speedy recovery".

Mr Navalny, 44, has for years been among President Vladimir Putin's staunchest critics.

In June he described a vote on constitutional reforms as a "coup" and a "violation of the constitution". The reforms allow Mr Putin to serve another two terms in office, after the four terms he has already had.  Read more >>
Posted by Anthony Derek Catalano at 3:05 PM