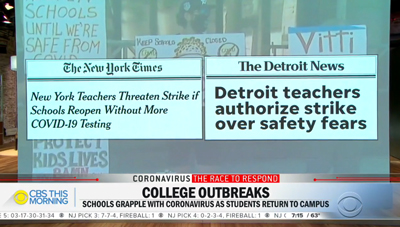 Thirty-six students at Purdue University who attended a party on Wednesday night have been suspended, a spokesperson for the university confirmed to CBS News. Syracuse University announced later Thursday that it had suspended 23 students for attending a large gathering on the "quad" on campus.

The Purdue party was held by the Circle Pines Cooperative, and the spokesperson said both the co-op and the attendees were suspended. The spokesperson did not specify the duration of the suspensions, but said students had the right to appeal.

The spokesperson added that the students were suspended for violating the university's "Protect Purdue Pledge," which lays out rules intended to stop the spread of the coronavirus.  Read more >>
Posted by Anthony Derek Catalano at 7:46 AM