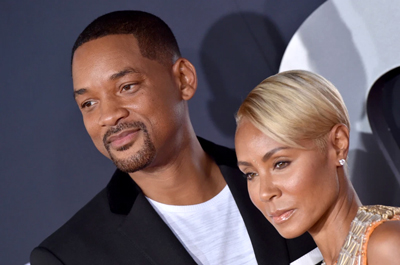 Will Smith and Jada Pinkett Smith/FilmMagic
By Sara Nathan
Will Smith and Jada Pinkett Smith are soaking up the sun at a swanky resort in the Bahamas, days after Pinkett Smith sensationally admitted to a relationship with August Alsina.
The couple, who revealed they split up before Pinkett Smith, 48, embarked on an “entanglement” with the 27-year-old R&B singer, was spotted at the Albany, which is part-owned by Tiger Woods, Page Six is told.
They were joined by their daughter, Willow, 19, at the Caribbean getaway that Forbes dubbed “one of the most exclusive resorts in the world.” Smith, 51, has previously posted photos of himself on vacation at the celebrity hotspot, where Justin Timberlake and Kate Hudson are also members.
The couple jetted out to the Bahamas shortly after filming an episode of “Red Table Talk,” where they addressed Alsina’s claims that he and Pinkett Smith had a relationship with Smith’s blessing.  Read more >>
Posted by Anthony Derek Catalano at 8:24 AM