Special permission given for weddings 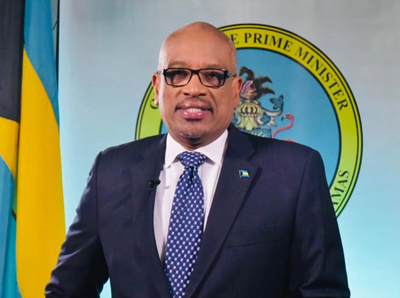 PM Dr. Hubert Minnis
By Kyle Walkine
Amid social media outrage over videos and photos of a wedding that took place on Harbour Island on Saturday while some Bahamians were forced to postpone their weddings due to a weekend lockdown announced on Friday, the Office of the Prime Minister (OPM) said in a statement last night that the competent authority granted permission for two “pre-planned weddings” with more than five people in attendance.
Prime Minister Dr. Hubert Minnis announced on Friday that weddings that had been scheduled for the next day could only happen with five people.
The order giving legal effect to that was released on Saturday morning.
OPM said last night it is aware of media reports of a wedding held on Harbour Island, Eleuthera, with more than five people.
“Permission was granted for a destination wedding on Harbour Island, Eleuthera, and a Bahamian wedding in New Providence,” the statement said.
“The competent authority has asked the Royal Bahamas Police Force to investigate reports that proper COVID-19 protocols were not adhered to at the wedding held on Harbour Island.”  Read more >>
Posted by Anthony Derek Catalano at 10:07 AM