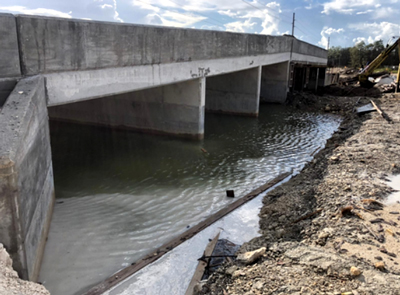 ANDROS, The Bahamas - A $2.1 million London Creek bridge in Andros is 60% complete, and projected to be finished by mid-September.
Works Minister the Honourable T. Desmond Bannister noted a number of creek ecosystems in Andros were blocked due to the construction of roads.
“The lack of openings to allow for uninterrupted water flow causes severe damage to the natural aquatic ecosystem including increased sedimentation in the creeks, damage to the health of the mangroves and decrease of the fish larvae export of the lagoon,” Mr. Bannister said.
SJK Engineering and Construction Services Ltd won the contract for the project.  The company’s owner, Stephen Knowles, confirmed that the flow of water through the London Creek ecosystem was interrupted by the construction of the road connecting North Andros to Central Andros many years ago.
“The project originally called for the erection of several culverts under the road.   A culvert is a structure that allows water to flow under a road, railroad, trail, or similar obstruction from one side to the other.   However, in the interest of allowing bone fish boats to traverse the creek a decision was taken to design and construct a reinforced concrete bridge.  Read more >>
Posted by Anthony Derek Catalano at 8:30 AM