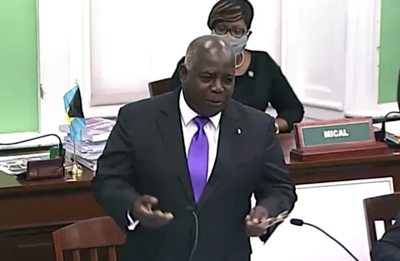 Leader of the Opposition, Phillip Brave Davis
By Sloan Smith
NASSAU, BAHAMAS — Progressive Liberal Party (PLP) Leader Philip Brave Davis yesterday challenged Prime Minister Dr. Hubert Minnis to “ring the bell” and call an election.
Davis’ comments came after the prime minister lambasted the Progressive Liberal Party’s record, as he opened debate on a resolution extending the state of emergency and accompanying emergency orders until September 30.
Minnis told Parliament that he had invited the opposition to attend an emergency Cabinet meeting last night with health officials.
However, Davis said this was not true, and expressed disappointment in the prime minister’s comments and behavior.
Pointing to comments Minnis made about how Bahamians view him, Davis said, “How could you in one breath appear to be handing the olive branch and the next breath when I reaching out you cutting the hand off.
“But if he believes, what he believes the people think about me, we could go and test it.
“He has the power. He can ring the bell and let them say what they say.”  Read more >>
Posted by Anthony Derek Catalano at 8:58 AM