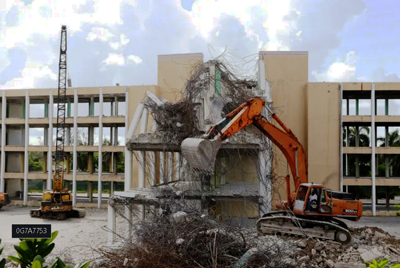 Demolition of the Clarence Bain Building. (BIS Photos/Patrick Hanna)
By ZNS Bahamas
The Clarence A. Bain Building that previously housed government agencies including the Ministry of Labour, the Road Traffic Department, is no more. The building, located on University Drive and Moss Road, has been demolished through a phased process. The Hon. Desmond Bannister, during his contribution to the 2020-2021 Budget Debate, announced that the project to demolish the Clarence Bain Building is scheduled to be completed in September of this year and will provide land area for an exciting development by the University of the Bahamas.
The building was named after Clarence A. Bain who was born in Love Hill, Andros in 1904. He was appointed a Cabinet Member in the first Progressive Liberal Party government in 1967 and represented the Andros District for the period 1956 to 1971.
Among his accomplishments, was his appointment as Commander of the British Empire for Public Service in 1971. The Clarence A. Bain Building was also named after him as a memorial. He died on July 14th, 1971.  (source)
Posted by Anthony Derek Catalano at 7:58 AM